Prof. Wehle Delivers a Clear Message: The Rule of Law is in Danger 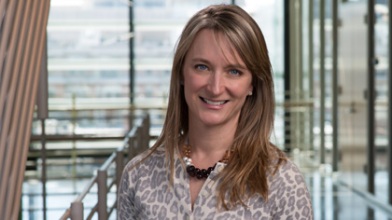 Kimberly Wehle, professor in the University School of Law and a former official in the U.S. Department of Justice, is on a mission. It’s not a mission with an easily articulated goal: Win the argument. Defeat the enemy. Take the territory. Instead, with an organic purposefulness that only happens when a passionate, skilled individual sets her mind to something, Prof. Wehle has become a leading voice in a national, even global, conversation about the growing concern that the tenets of American democracy, articulated in the U.S. Constitution, are becoming frayed.

Her voice is everywhere—CNN, MSNBC, NPR, the major broadcast networks—on an increasingly routine basis. In one day, she had major appearances on both NBC and NPR. Next spring, she’ll publish a book, Debatable: A How-To Guide to the Constitution. What Wehle is saying, just as routinely but also consistently, is that the American government is ceding its role as the guardian of these democratic principles. Between the White House, the Congress, and the judiciary, a strange kind of authoritarianism is worming its way into our system. With 10 years of teaching and scholarship at UB, and prior experience as an Assistant U.S. Attorney, as an associate counsel in the Office of Independent Counsel Kenneth W. Starr, as a law clerk to a federal judge, and as an attorney at the Federal Trade Commission, Wehle is delivering a strong message that the country is in trouble.

“It’s not political,” she says. “It could be Republicans or Democrats doing it—it doesn’t matter. The rule of law is under attack. I never set out to do this, but I feel almost a spiritual determination to speak. The constitutional viability of the country is at stake.”

The School of Law’s Updates blog recently talked with Prof. Wehle about her rising profile in mainstream media, and where she thinks this slowly unfolding crisis is heading. The conversation has been edited for clarity and length.

How did this media work start for you?

I was sitting at home one Sunday, and I read this piece in the New York Times that stated, authoritatively, “The president’s power to pardon is absolute.” That’s inaccurate. I knew that wasn’t right because I’ve done work in that area—and because the law is grey.  It’s rarely black and white. I couldn’t let it go. So I wrote an op-ed that was published in The Baltimore Sun that argued against that point of view. Then I started to write more, on my own. I wrote for The Hill in D.C. I’ve done several pieces for that publication. Then local radio picked up on some of that work—WBAL and WTOP. I was interviewed a couple of times there. Then a producer at CBS heard me and got in touch. Paula Reid, their justice correspondent, interviewed me. I can speak with some authority on constitutional matters, on federal courts and so on. It’s just taken off from there.

It’s fair to say that you are a frequent guest on a lot of major news shows—you’ve been queried by everybody from Wolf Blitzer to NPR’s Rachel Martin, and plenty in between. Do you have an agent? How are you managing all of these invitations?

I’m keeping my own calendar these days. I don’t say yes to everything. Teaching is still number one for me, but I feel like I’m doing an important public service. The rule of law is under attack by this White House, and the Congress is abdicating its oversight role. Many people who speak in the media don’t have particularly deep expertise in constitutional law and constitutional theory. But nowadays that kind of thing is on the front page of every newspaper—activist vs. originalist judges, for example—and few people understand the theoretical complexities that go into that. Still, regular people cast votes on these things, and giving clarity to the truth around them is what motivates me. Sometimes I stop for a minute—it’s stunning to me that I’m in this position, but then I remind myself that it is a tremendous privilege. I didn’t plan for this in my life.

You’ve met some high-profile figures in talking about the Trump White House, the Mueller investigation, and so on—John Dean, David Gergen, Donna Edwards.

Yes. What I’ve noticed is that we’re all talking about the same thing: upholding the rule of law. The public officials involved in these matters, like Rod Rosenstein, who I’ve known for years, are after the same thing. These officials don’t have press secretaries, people lining them up for interviews. They are not in it for money or fame. They’re doing the work. And it’s hard work.

How would you describe what is happening in the government? Is our democracy truly under threat?

I can speak with some authority on this. I’m not concerned with the politics of the day, or Trump’s latest Tweet. I am concerned about accountability. We are moving into a tyrannical state, and that’s not good for anybody. When it comes to the Constitution, there is no “cop on the block.” It’s like a contract to renovate a kitchen. If the contractor walks off the job, he gets to keep the down payment unless the homeowner goes to court to enforce the contract. The Constitution is similar. It contains rules that bind our government. But in order for the rules to mean anything, the Constitution must be enforced—otherwise it’s just a piece of paper. Right now, it seems like a lot of people in the government, elected people, are afraid to do their jobs under the Constitution. Suddenly, the viability of our democracy is at stake. I think we need to press the red button on that viability—it’s in danger right now.

Let’s say the rule of law is bending. Where does that lead us as a nation?

We’re a young country. We don’t know. But historically, what we’re seeing are the ways that a democracy can fall apart. Attacks on critics, violent language, ignoring the rule of law. All of these tactics lead to tyranny. Our job, as lawyers and legal educators, is to provide measured, informed answers when people ask alarming questions like, “Can he do that? Can they get away with that?” Well, he can, they can—if there are no consequences. If you have a child, and you make a rule, “No eating in the living room,” that’s your rule and the children know they have to follow it. But if one day you say, “OK, just this once, you can eat in the living room,” then that rule is just broken. It’s lost its force and validity. The child knows it instantly. That’s what so many of us see happening at the top echelons of the executive branch, as well.

Your way of articulating that rule of law argument—that once you break it, it’s gone —is straightforward and powerful. That has to be a reason why so many TV producers want you on their shows.

I have this voice, and I have to use it. It’s almost a spiritual thing for me. In my teaching, I tie the law to day-to-day life and current events all the time. My students appreciate that. They integrate it and carry it with them.

With so much uncertainty out there in 2018, what are you telling people to do? We can listen and try to understand what you’re saying, but there must be more.

Educate yourself. Every person has to do more, and learn more, about how democracy works. Get to know your Constitution. And you have to vote. Voting is what works.

Several of  Prof. Wehle’s media appearance are available on her website.