Posted on February 19, 2020 by University of Baltimore School of Law

As part of its Black History Month programming, the Bar Association of Baltimore City hosted an event focused on the role of African Americans in the legal communities of Baltimore and Maryland. UB Law Prof. Jose F. Anderson participated in a panel discussion on race, gender and the law. 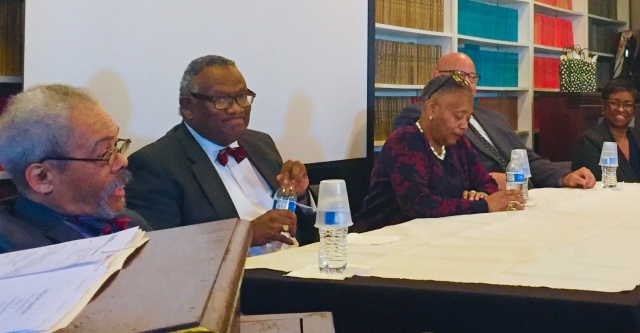 The Feb. 18 luncheon, held at the Clarence Mitchell Courthouse, began with the debut of a recently completed video on the history of African Americans in the Maryland legal community. Luminaries such as Prof. Larry Gibson, of the University of Maryland Carey School of Law; the Hon. Robert M. Bell, retired chief judge of the Maryland Court of Appeals, and Anderson described the difficulties Thurgood Marshall and others faced when applying to law school. For most of the 19th century, there was a statute requiring a person to be white in order to practice law. In 1885, a court declared the law unconstitutional, and Everett Waring became the first black admitted to the Maryland bar. He was also the first African American lawyer from Maryland to argue before the Supreme Court.

In the documentary, Anderson discussed how Charles Hamilton Houston and Marshall, who went on to become a Supreme Court justice, challenged University of Maryland School of Law’s whites-only admissions policy. The film also recognized some famous firsts: Juanita Jackson Mitchell, the first black female lawyer admitted to the Maryland bar, in 1950, and Harry A. Cole, the first black lawyer appointed to the Maryland Court of Appeals.

Following the film, Bell gave a tribute to the Hon. Solomon Baylor, who died in 2007, praising him as a role model who embodied attributes of integrity, strength, character and respectfulness. Then the panel discussion began, moderated by the Hon. Lynn Stewart Mays. Aaron DeGraffenreidt, an assistant Baltimore City solicitor and president of the Monumental City Bar Association, shared that he decided to become a lawyer after realizing, as a teenager, that black Baltimoreans got “the bad end of the stick in a lot of ways.”

Anderson shared that as a child, he visited his grandmother’s farm in Howard County, where he met a black preacher and activist named The Rev. Roland Howard. “Though he wasn’t a lawyer,” Anderson said, “he made me appreciate the power of putting the law in the face of those who were supposed to be following it.” Anderson’s future work with Legal Aid lawyers inspired him to fight for the underserved and disenfranchised, he said.

During the advice portion of the conversation, Anderson noted that throughout law school and his early career, help was available to him from many sources, but he usually did not take advantage of it. Looking back, he said, he would have done it differently. “Take the help,” was his recommendation to young lawyers and students.

About University of Baltimore School of Law

The University of Baltimore School of Law provides a rigorously practical education, combining doctrinal coursework, intensive writing instruction, nationally renowned clinics and community-based learning to ensure that its graduates are exceptionally well prepared to practice law.
View all posts by University of Baltimore School of Law →
This entry was posted in Uncategorized. Bookmark the permalink.